Jan Blok was a renowned musician from Zeeland. He was well known for his singing and rough vocal style, and was also a multi-instrumentalist: he played the guitar, harmonica, and piano. His musical style draws influence from a variety of genres, including rock’n roll, blues, and country music. Much of his discography and repertoire also demonstrates aspects of jive music and rockabilly (a fusion between hillbilly and country music).

Largely owing to his broad interest in music, Blok’s career included work as both a band member and a solo artist. He played in numerous bands, including the Shakin’ Stevens and the Sunsets, The Flying Electra’s, Rocky West and the Humbuggers, and Delta Blues Band. From this it can be seen that his musical career was marked by much variety, but not quite longevity: each stint with an individual band normally lasted only a few years. When discussing his experience working in musical groups, Blok stressed the importance of a shared basis for musical vision: “If a group doesn’t have a good foundation, it will not work out, you just have to work very hard for it.” As a solo artist he produced an LP in English, and also sang in Zeeland dialect. His song Heboorn Voe ‘ t Geluk reached the 14th place in the Zeeland Top-40 in 2007. Widely referred to as a “ rock maniac,” Blok’s diverse experiences and widespread musical involvement left a significant impact on modern popular music throughout the province of Zeeland.

Blok was born in Kruiningen into a family with strong musical background: his father played the harmonica, as did his sister. His brother played both the violin and the clarinet. It was around the time when Blok began to show an interest in playing the guitar that it became apparent to his family and family friends that he displayed an unusual interest and devotion to music, especially for most children his age. It is said that Blok’s mother was continually puzzled at why her son spent more time playing the guitar than socializing or ‘chasing girls’. In a later interview Blok confessed that back then, he would often turn on Radio Luxemburg which would broadcast Rock’ n’ Roll music, which he thought much more beautiful than all girls put together.

Blok was exposed to different influences from a young age, because of his father’s profession. His father had been a truck driver, and so young Blok had the opportunity to absorb many influences from big cultural cities, such as Brussels. According to him, this gave him an “information advantage” in comparison with his peers, who, according to him, always thought that Jan was a bit a weird. However, these little trips abroad were not what influenced Blok the most when it came to his musical career. According to him, country music group ‘The Moluccans’ were responsible for much of his musical inspiration. At age 12, he heard their country performance and was extremely enthusiastic and taken off guard by the performance. Blok describes himself as delighted with the sound because, in his opinion, it was so much richer than the “plain” Dutch music from that time. At this point he decided to buy a guitar so that he could begin to emulate the “magical” sound of The Moluccans . Together with Dook Kopmels he started a band called The Rocking Devils. Interestingly, despite many members of his family also being involved in music, Blok did not receive much support from his parents in his pursuit of a music career. Far from being enthusiastic about his musical inspiration, his parents were concerned about the drop in his grades. Thus, under increasing pressure form his parents and in order to keep peace at home, Blok refocused on completing school and put his aspirations for a musical career on the backburner. 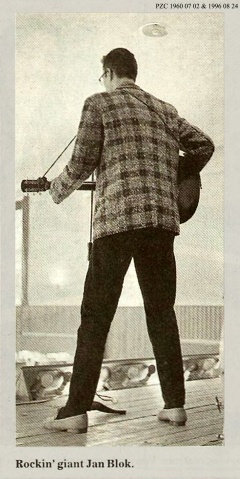 It was not until the early 60s that Blok decided it was time for him to reconnect with his musical roots. He participated in numerous talent shows, and in the end received the opportunity to play as one of the support acts for musician Willy Alberti in Kruiningen. At this point and after relative success as the opening act, Blok chose to travel to Brugge with his band, The Flying Electras for a performance. Upon his return, he learned that his father had committed suicide in his absence, which would bring upon him a period of grief and guilt for several years.

By 1967, Jan Blok appeared to have found some consistency in a wife, a daughter, and a job as an elementary school teacher at the Theo Thijsenschool in Zierikzee. In addition to his official occupation, he acted as the unofficial harmonica player with The Shakin’ Stevens and Sunsets. After a few years, in March 1969, his wife asked for a divorce and took their two year old daughter, Ody, with her. Following this destabilizing life event, Blok became depressed, failed to show up regularly at his job, and was thus fired from his job at the Zierikzee school. In addition to his absences, Blok was often known to neglect his duties in teaching the children grammar, and instead teach them to play the guitar. After briefly moving to Utrecht, he moved back to Zeeland. He then settled in Hansweert, where he began to live in solitude, largely cut off from all contact with his musical acquaintances from earlier in his musical life. His performances during this period were quite sporadic; Jan would occasionally respond to calls from old friends who wanted the old ‘wild child’ back. One example of this was the phone call made by Mac Bouvrie in 1975, who was the owner of the MAC-label. He asked whether or not Blok felt motivated to play with Little Richard on the 16th of June. Together with the rest of Rocky West and the Humbuggers (one of the many bands Blok played in) in the Vorst Nationaal, Brussels. After this performance, Blok’s return to a solitary lifestyle was even more absolute than it had been previosusly: he unplugged all connections he had to the outside world, which, for Jan, also meant a literal unplugging of his phone cable. Blok used his time alone as the framework for an immersive music project: he worked on a solo LP that was published in 1981: What Loneliness Can Do. The record was largely recognized as a project revealing and discussing the various losses he had suffered in his life. This was evident in the first track, (Ody You’ re my Baby) and the last song (Ody I’ m Waitin’ On You), both narrating his longing for reconnection with daughter. In 1989 the LP was rated within the top ten of best LP’ s by the VPRO show Stompin’. The record is still a collector’s item within Rockabilly circles.

During an interview in 1992, Blok expressed his feeling that life had finally begun to look brighter. He confessed how much crisis centers helped him and how his daughter had reconnected with him, in 1988. He had decided that money did not matter in life, and that one should try to see the positive side of everything. Even though at this point he was living on welfare, and he had neither a job nor the prospective on a new LP, he did have a daughter and a life companion: and for Jan, that was enough.

On June 21st, 2006, Blok was found dead in his home in Kloetingen, at the age of 62. That same year, a tribute was organised, and would be so every five years later from 2011. Musicians like Peter Kempe, Jan van den Berg and Champagne Charlie all gathered to honour Blok and played music the way he would have loved it. They all gathered to acknowledge Blok’ s pioneering role in the modern music of Zeeland. 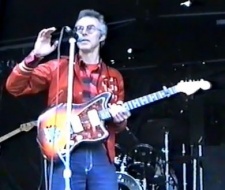